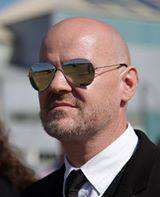 LISTEN LIVE: http://www.blogtalkradio.com/virtual-vision-fm/2013/10/27/virtual-vision-fm
Since Ray can remember, he knew there was something different about him that made himself a loner at times. He can recall vividly playing alone, or with his cousin in the cellar of his grandfather’s large house. To them it was a like a wonderful full of possessions and memorabilia collected over the years and we were talking to a man who had served in the Battle of the Somme war.

His passions for the paranormal eventually lead to opportunities such as filming with BBC3 talent department, being asked to appear on the Graham Norton Show (which Ray and his team declined) filming as part of the Vision News paranormal team ‘Vision Paranormal’, previously to this Ray starred in a very minor role in the UK based film as a Russian soldier called Nine Dead Gay Guys, a British comedy by 9 Films starring Stephen Berkoff and Carol Decker. He also went behind the scenes of the Living TV series called Ghost Towns which was filming in Salisbury and was later asked to be a future advisory on a forth coming television episode.

Writing is a passion of Ray which has lead to him to have his own bi-monthly column called Ray Jorden Interviews in the UK publication, Ghost Voices Magazine, which Ray has been writing in for over two years since issue One, interviewing people within the paranormal .